Many places are talked about and known for being a truly special place. We have traveled countless hours and thousands of miles to see something extraordinary. At times, there is a disappointment from so much built up enthusiasm. Maybe it just looks better in photos than in real life. For me that was Bocas Del Toro. Then there are places that have you in awe and vivid mental pictures stay in your mind for years. Photos cannot do it justice. For me that was Machu Picchu. And then there is the Nyiragongo Volcano. 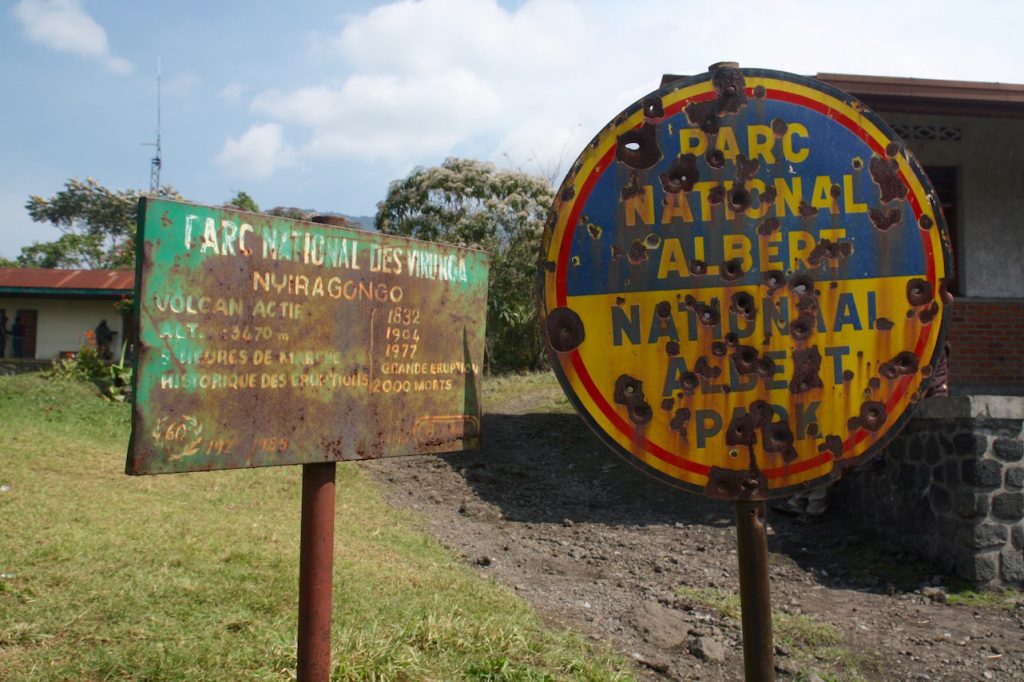 We hiked for five hours from the base of Nyiragongo with two armed guards. It was a slow-paced hike, with several breaks. The sun was hot and it was a clear day. After hiking up rocks that were formed by a lava river in the 2002 explosion, the ascent becomes steeper. As we get closer to the summit, the clouds surround us and the temperature drops drastically. Vegetation is lush early on, but as the hike continues, it becomes a harsh arid landscape. Nothing but 15-year-old lava formed rocks are beneath your feet. 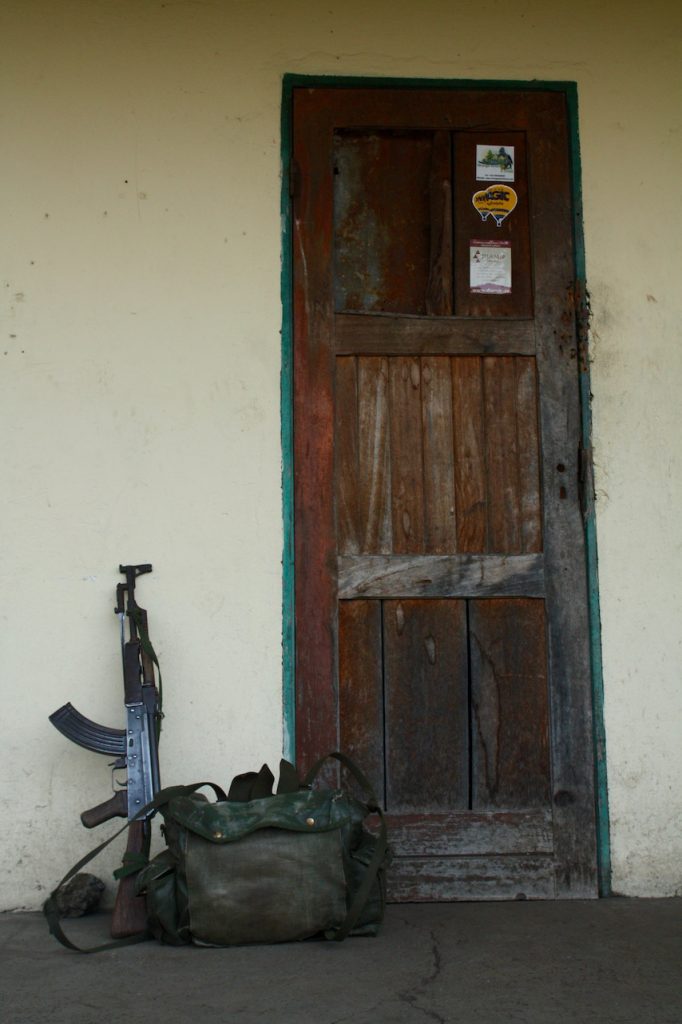 Doorway to Sign in for Your Hike in the D.R.C.

The eerie sight of huts on top of the volcano come into distance through a thick cloud. The mist is strong and you cannot see much, but the excitement builds. When you arrive, you rush into your hut to change your clothes. In less than one hour, you went from sweating in the hot sun to wanting a full winter get-up. It is near freezing with heavy winds, and the sweat on your back is getting extremely cold. 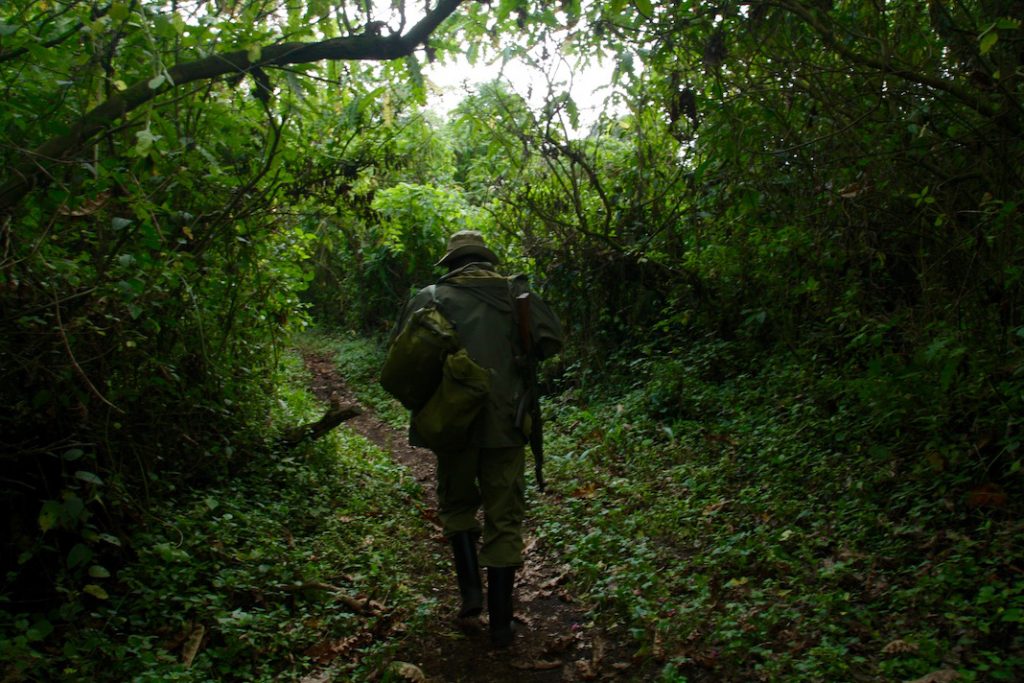 Minutes later, you run back outside. You want to see it. Not knowing what to expect. You already saw pictures, but that doesn’t matter. You step on the edge of the rim of the crater. And then it appears. Words are said, but sentences are not formed. Expressions are made, but none make sense. Staring into earth, a massive pool of lava shifts around beneath you. 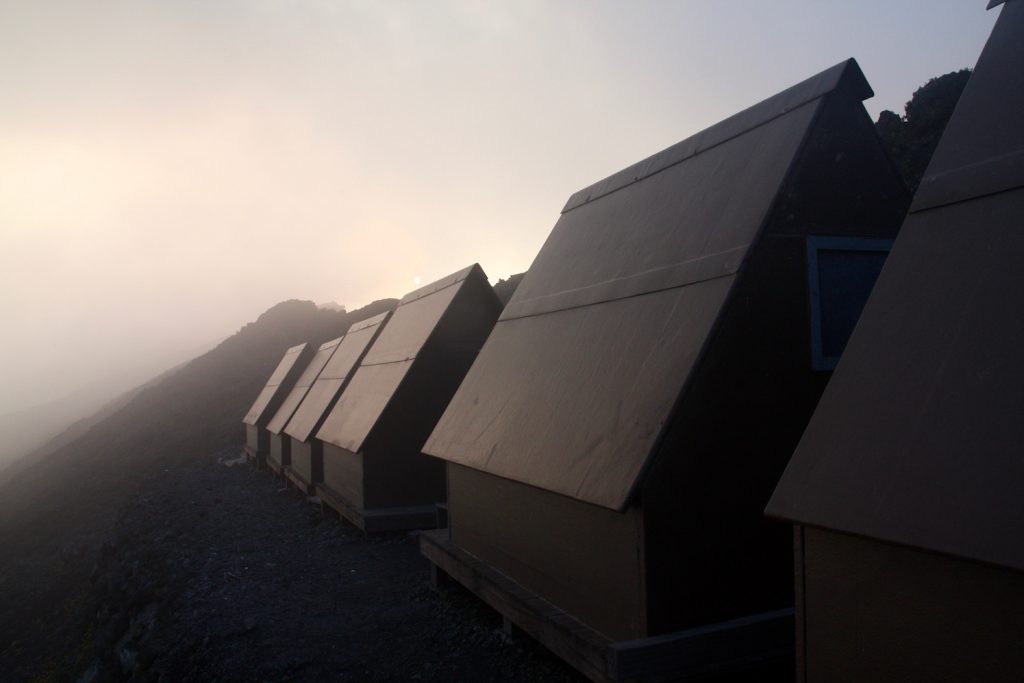 Just 48 hours earlier, we were graced with a new fissure that erupted. Lava was exploding over 50 feet into the air then crashed down on one of the two newly formed lava rivers. These rivers feed back into the Lava lake. This is the Nyiragongo Volcano. 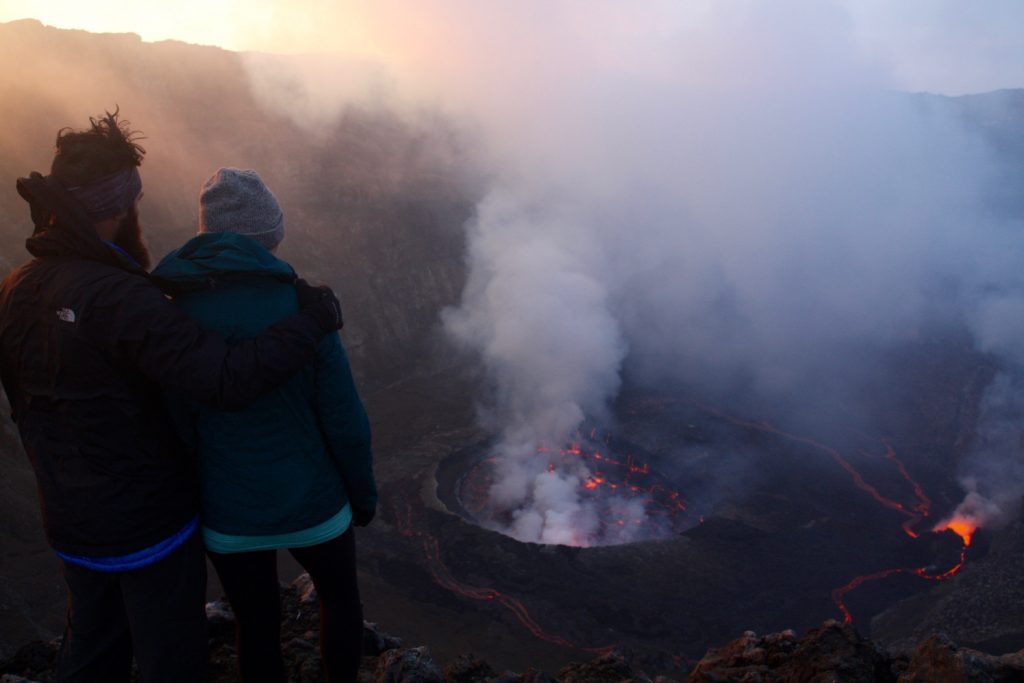 No Words Initially Could Explain our Feelings at First Sighting

Due to several incidents in 2018 as well as the death of a park ranger and kidnapping of two British tourists in May 2018, the park is closed for the remainder of 2018 until further notice. The park has publicly stated they are reviewing their security measures and will assess the crisis of militia in the region before opening the park to tourists again.

Permits are $300 USD per person. You can book directly with Virunga National Park on their website.  Once you book the Nyiragongo Trek, you then can apply for a tourist 14-day visa. This also can be applied for online with Virunga. It will take 2-3 days for processing. Visas cost $105 per person.

How to Get to Virunga

Goma is directly across the border from Gisenyi, Rwanda. You must cross the Grand Barriere border patrol into the D.R.C.. The border crossing is open from 8 AM until 7 PM every day. To get to Gisenyi, there are direct buses from Kigali and Kampala. The national park will pick you up from the border at 8:30 AM and bring you to the park office to complete some forms and get the physical permit. You can hire a porter to bring your bags/gear for $24 USD. Ask at the office before departing for the hike. Transport with the park or private will then take you to the park for a 10 AM hike.

Hire an armed guard transfer for $28 one way per person. You can also hire a 4×4 private driver from contacting the Virunga Office for around $80 USD round trip if you have multiple people. If you have time in Goma before your trip, you can likely arrange for transport for much less, as it is only a 30-minute drive from the city center. 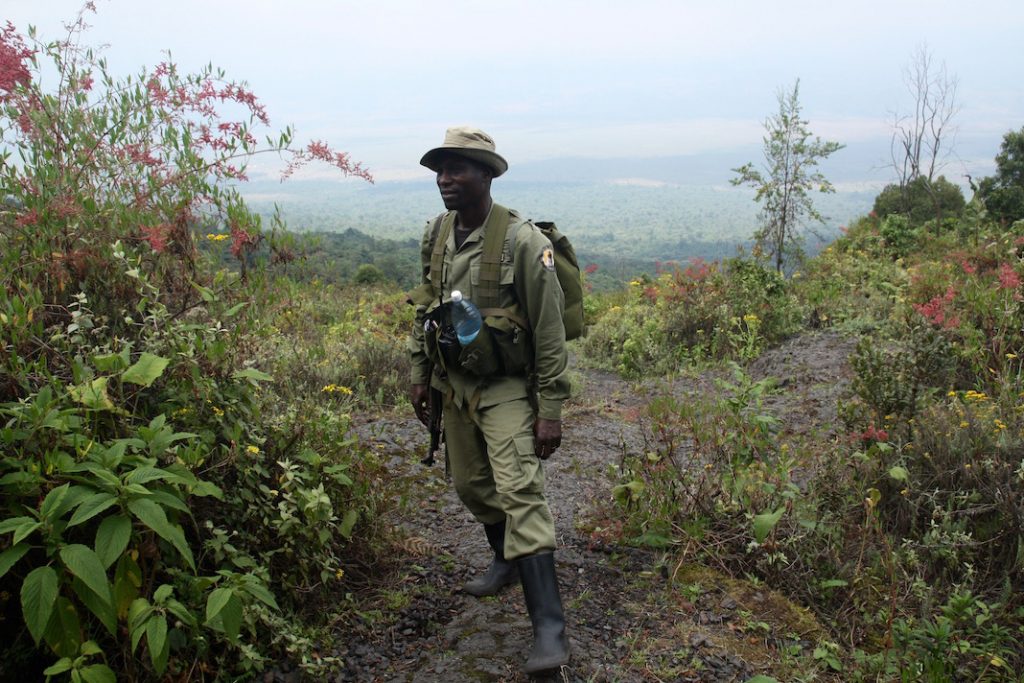 Armed Guard on the Hike

You can view the lava lake at any time, but just after sunset and during the night is the best for viewing. In mid-2016 there was a new exit point with some activity to the far right of the crater. Only days before our arrival, this activity really stepped up and was actively exploding and spewing lava, forming massive rivers and waterfalls all leading back to the lava lake. At night, the red from the lava shines bright and the color is so strong even the clouds turn red.

Pictures of the Lava Lake 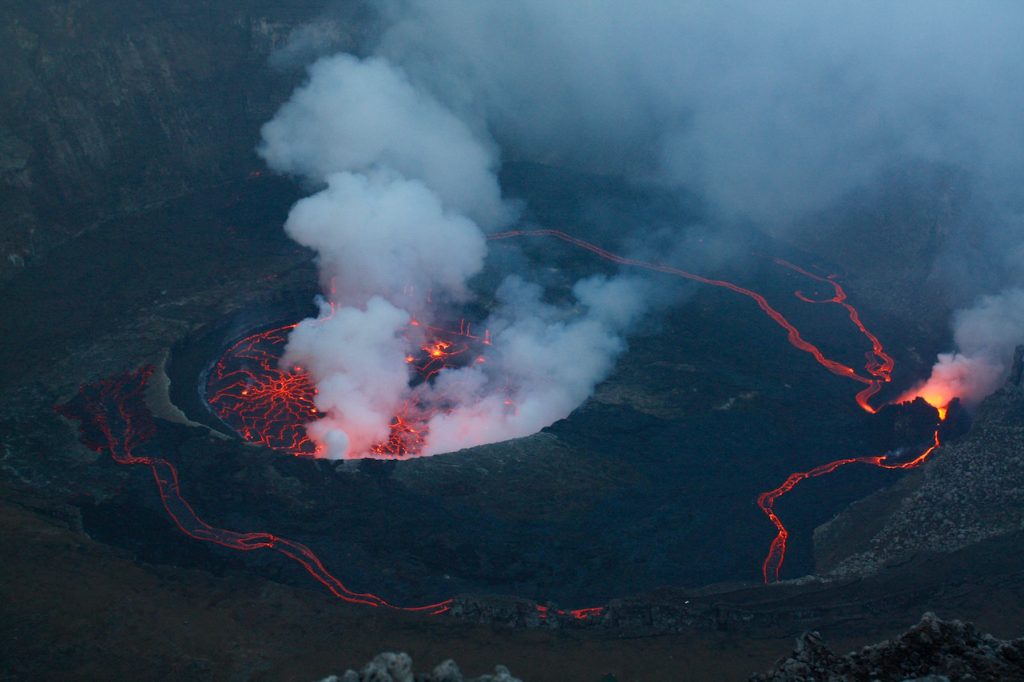 Lava Lake from the Rim 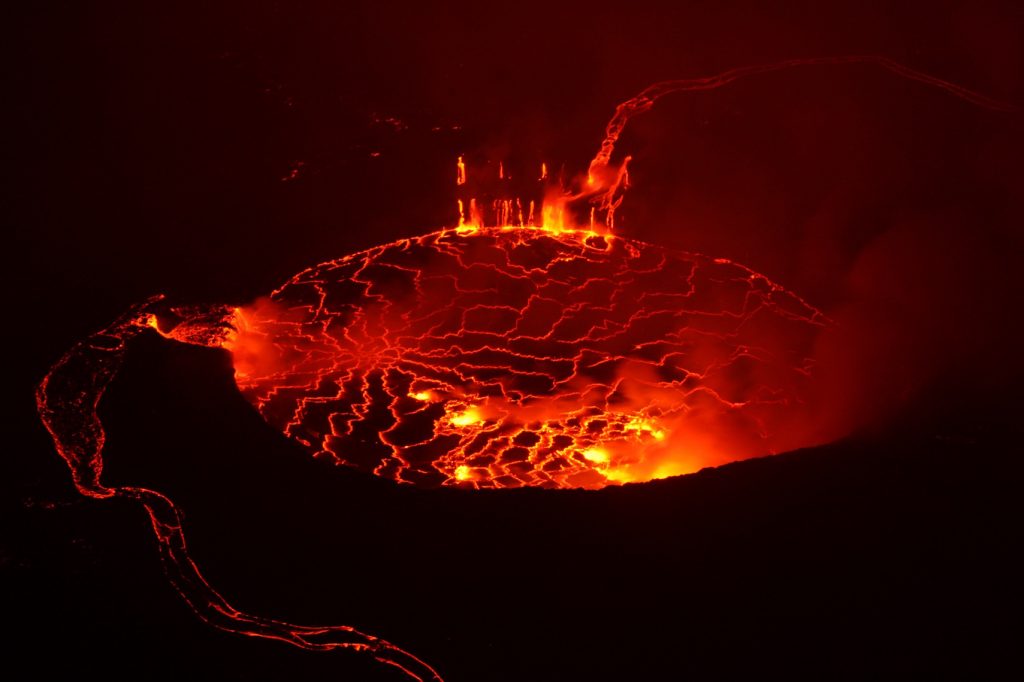 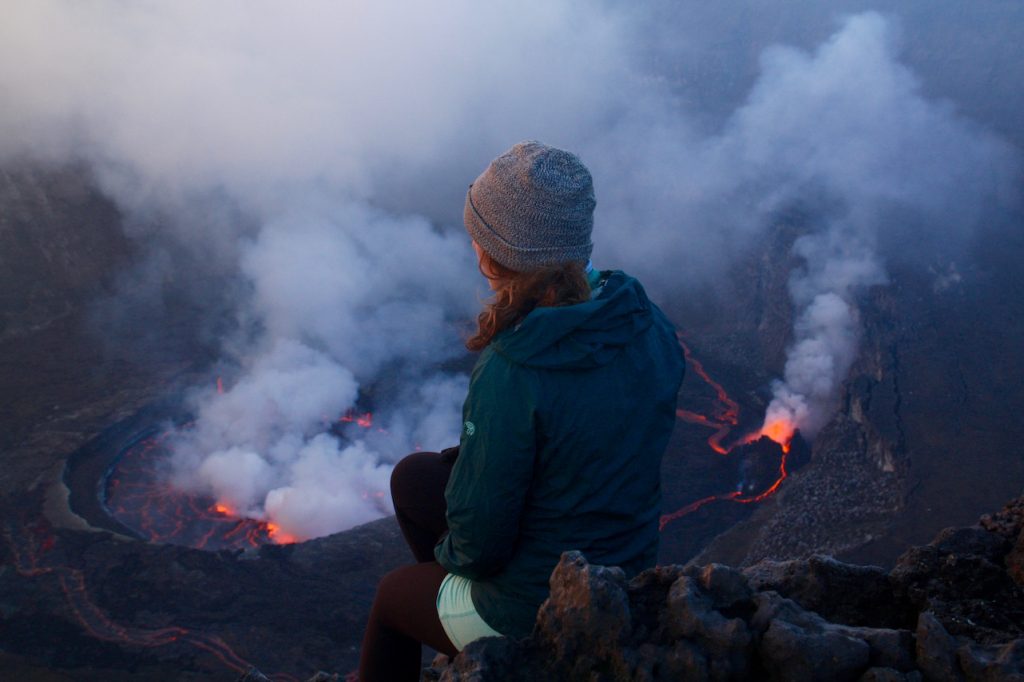 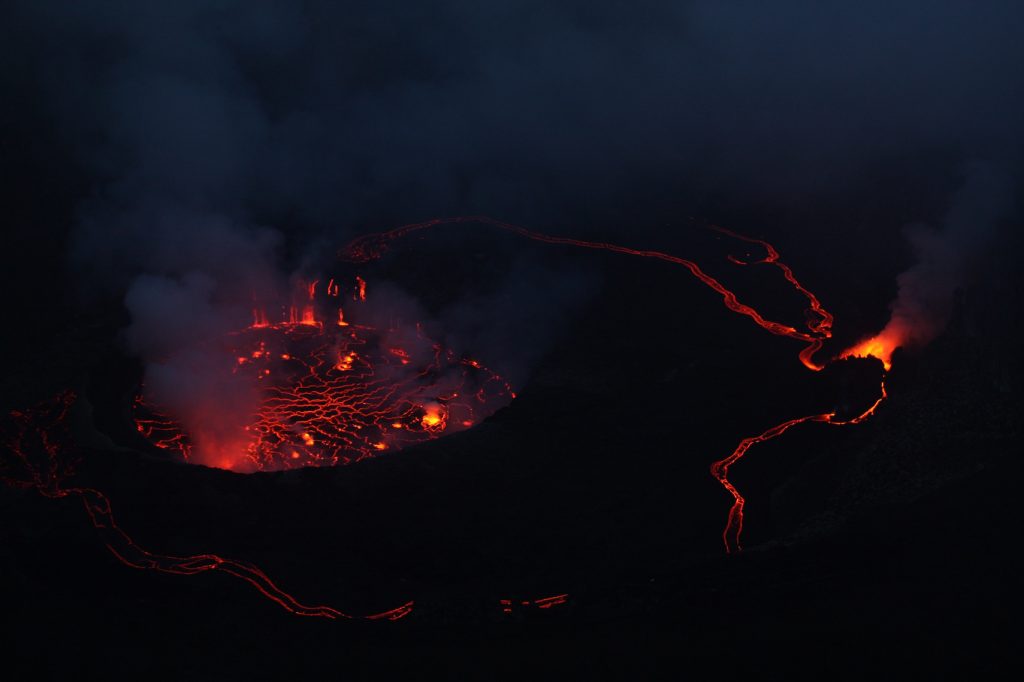 The park can make mistakes and is not the most organized at times. On several occasions, people did not receive their sisa documentation by the day they were supposed to enter the country. Make sure to call/email and get your visa documentation by email before going to the border. Three days before our already paid trip, Virunga informed us the day we paid for (which was suggested by the Virunga office themselves) was full. Luckily we were already in Gisenyi, and we went the following day instead. Someone we hiked with had paid for the armed transport with Virunga, and it never showed up for her return. Luckily we were still there and had a private driver and drove her back to Goma. Make sure to over-communicate as best you can with Virunga National Park. 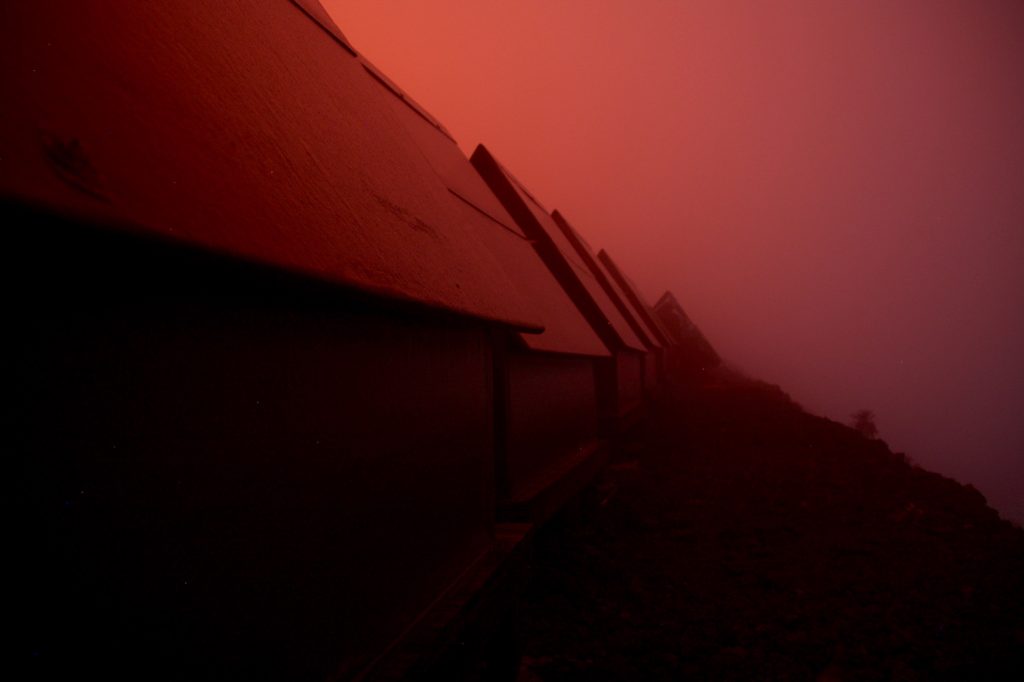 The Overnight Huts at Night

For the volcano trek, you will need to bring a full size pack with hiking gear. The summit of the volcano is at 11,382 feet (3,470m). The temperatures routinely are below freezing at the summit. Ensure you bring proper cold weather clothes and a proper sleeping bag rated 0°C/32°F. Packed meals and all gear is available for rental through the park if needed. There is no water at the summit, so if you do not buy a meal plan, you must bring enough water for two days. Don’t forget your camera with charged batteries, this will be the trip of a lifetime! 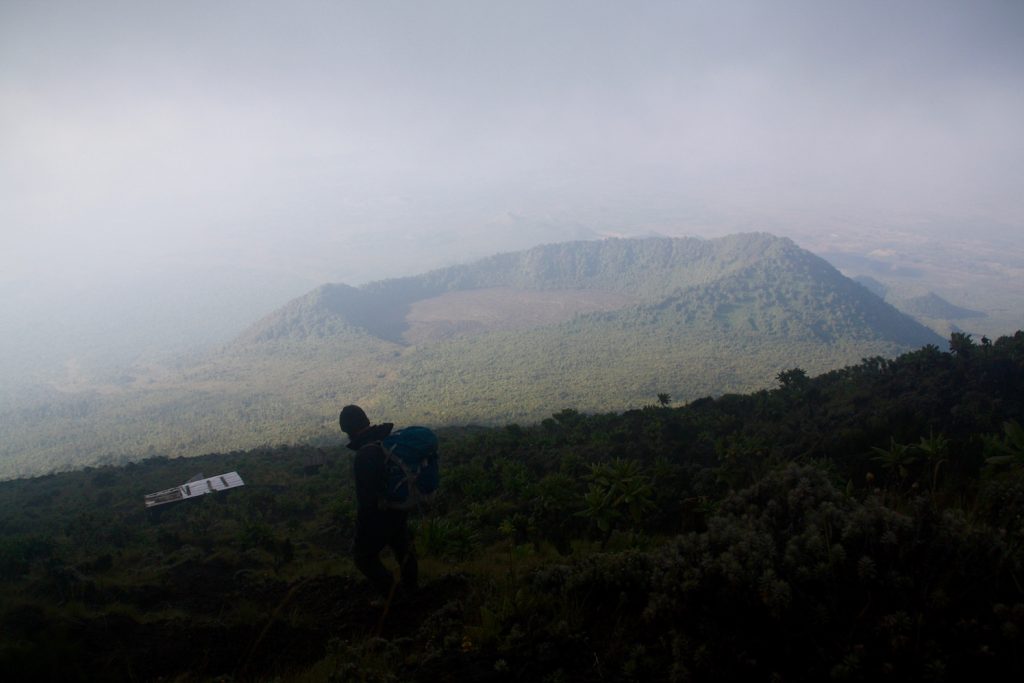 Other Activities in Virunga National Park

Gorilla Treks – Virunga NP in Congo has 9 families consisting of 153 mountain gorillas (and growing) in the wild. Congo is the cheapest place to go on a gorilla trek. There are two rainy season, between March through May as well as October and November. It is best to go on a gorilla trek during the rest of the year during the dry seasons. Unlike treks in Uganda and Rwanda, gorilla trekking in Congo does not book up. It is easy to get permits as well as setting up last-minute trips. While we were in Goma, it was possible to set up a trek for the following day. Because of the low tourism to Congo, there are minimal crowds while trekking. The time on the trek itself depends where the gorillas are. Trackers will be ahead of the group looking for the gorillas. It could take under one hour or several hours getting to the gorillas. Once the group is with the gorillas, one hour is spent on this incredible experience.  The cost for a gorilla trek in Virunga NP is $400 USD. Check out our blog post on How to Pick a Gorilla Trek in Africa for more details.

Chimpanzee Walk – If you are staying at Mikeno Lodge, you can take part in a daily chimp walk at 6 AM. Walks are booked on site at Mikeno Lodge and only take 4 guest at a time. One hour is spent with the chimpanzees. Cost is $100 USD.

Mikeno Lodge – For a luxurious night in the jungle, the Mikeno Lodge has views of several volcanoes and many native monkeys in the area, including chimpanzees. Cost for a single is $330 and a double is $475. Accommodation includes all meals.

Rwenzori Trekking – The Rwenzori Mountains are some of the most isolated, remote and incredible mountains in Africa. Summits reach heights of 16,761 ft (5,109 m) and the mountains are home to Africa’s largest and oldest glaciers. These hikes are for experienced hikers and are typically 7 – 10 days depending if you summit Margherita Peak. The best time to hike is between January and mid-March or June through August. Permits cost $200. Guides and porters also must be hired, inquire with Virunga NP on options and prices.

Tchegara Island – Enjoy time on this Lake Kivu island with views of several volcanoes. Rent a kayak and enjoy some lake time. Permits and boat transfers cost $100. Single rooms cost $160 per night and double rooms cost $216 per night. Rooms include all meals.

For more information on all activities included in this post, check out the Virunga National Park website.

Check out our other Congo Articles: 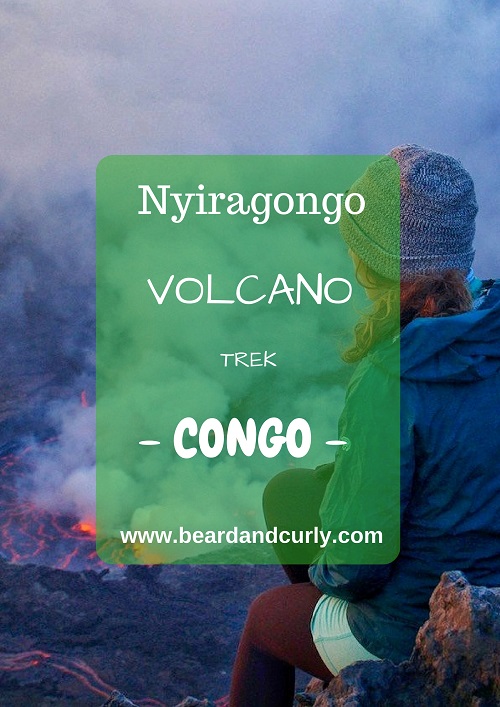